Finally, Google Wallet has mastered the art of walking. Let me start by saying that I first started using Google Wallet on my Galaxy Nexus as soon as it was available, and that the first free $10 you get for using the app for the first time is the only reason I even tried it out. But when I used it for the first time, man, I could see the future taking form–a world where we don’t need to carry around cards all the time just to make payments. Obviously, that won’t be tomorrow. But it’s getting closer.

Unfortunately, there’s a problem–I don’t use MasterCard. I use Visa, which wasn’t supported by Google Wallet at its launch (more on that in a second). At the time, there were two drawbacks to Google Wallet; the first you already know–it only worked with MasterCard. Fortunately you could always load up a prepaid card in the app using any card you have, but topping up a card in advance just to make a payment you could have made with the card directly wasn’t exactly, well, you know. The second drawback, was that you could only use Google Wallet in stores with MasterCard PayPass terminals.

The first problem has been fixed today with an update to Google Wallet (available in the Play Store), which enabled support for any credit or debit card to be used with it. The second problem however, is still present. Now, I don’t know of any plans that might be in place for rolling out PayPass to more locations–or if there will be other NFC solutions besides PayPass that are coming to stores–but until then, this is quite a problem for a payment method that is supposed to allow for you to pay with your phone. Hopefully something changes with regards to that soon, but in the meantime, Google Wallet is still incredibly cool; I just didn’t truly understand how great it was until I tried it out for myself.

Let me cut back to when I first used Google Wallet–I had just talked to one of my friends about it and had shown him a YouTube video about how it was supposed to work. Then it dawned on us; duh, why don’t we just go and try it out for ourselves. But where is PayPass available? A quick search showed that MasterCard had already taken care of that with an app. After quickly installing the PayPass locator app on my phone, we were off. Sports Authority and McDonald’s were the only two nearby places at the time, so we opted for Sports Authority.

It was only then that I discovered how difficult it was to find something of substance that was $10 or less at Sports Authority. Why $10? Well, if you were listening, Google gives a prepaid $10 card on Google Wallet to anyone who installs it. Free money–gotta love it. Back to the story.

After looking around for a little bit, I opted for a new keychain in the form of an S-biner that also doubled as a bottle-opener. How nifty! No longer must I lug around that bottle-opener that I used to have to take with me everywhere! So. Yeah…

…anyways, with my trusty new S-Biner in hand, we made our way towards the register, where the cashier promptly rang up my new keychain. And now for the moment of truth. I grabbed my phone from my pocket, pushed the power button, and held the back of it up to MasterCard’s PayPass terminal. 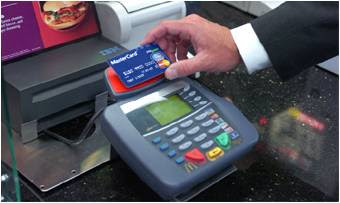 Looked like this! Except, with a phone… and not at McDonald’s
Do you know how many different looking PayPass terminals there are? Damn. Google Image Search it!

Long story not-so-short, Google Wallet is pretty cool, and this will catch on extremely quickly if more stores get on-board with providing NFC-capable terminals (NFC is what makes this all possible, not MasterCard. NFC stands for Near Field Communication). I suspect it will really take off when the new iPhone comes out, since I’ve heard that it will likely have NFC (though I could be wrong, don’t quote me on that). It’s unfortunate that things only catch on when Apple does it, despite them not being the first to do it, but that’s the world we live in, folks. It’s funny, because when I try to explain how this works to people I know, they just shrug and tell me that the iPhone does it too, you just plug a device into the phone and swipe your card.Immediately my phone prompted me for the PIN I had only just setup not an hour before. I tapped it in, and held my phone up to the PayPass terminal for one last, brief second. My phone showed a message saying my payment had been accepted, my friend said “holy crap!” and the cashier–startled, looking as if he had just witnessed some act of God–asked, “Did you just pay with your phone?” Yes, yes I did. “Wow. That’s pretty cool.” Yes sir, indeed it is. Thank you, Google! Thank you for buying me a new S-Biner!

Sigh. Anyways, if you have a Galaxy Nexus, Nexus S, or Nexus 7 device, then you can already use this at your local Macy’s, Sports Authority, McDonald’s, OfficeMax, Old Navy, and more. You can view a list of places supporting PayPass here. Do note that some Walgreens apparently have the NFC function turned off in their terminals. I have no idea why this is, but it totally makes you look like an ass if you’re trying to show someone how easy it is to use Google Wallet when the damned store has the functionality disabled.